Inflation was tame in February per the Fed’s favored measure, Personal Consumption Expenditures. However, inflation is expected to rise this spring – and that could impact both Mortgage Bonds and the home loan rates tied to them. Don’t miss the explanation about this below. And of immediate note, a large cargo ship is blocking the Suez Canal, which is impeding global trade and could cause some spikes in inflation.

Over in the labor sector, Initial Jobless Claims fell below 700,000 in the latest week for the first time since the pandemic began, while the number of people continuing to receive regular benefits also declined. Despite the rosy headlines, it’s important to take stock of the entire picture. Pandemic Emergency and Unemployment Assistance claims both increased in the latest week, as did the total number of people receiving benefits from all programs, which is now at 19 million. This is compared to just 2 million people in the comparable week from last year. 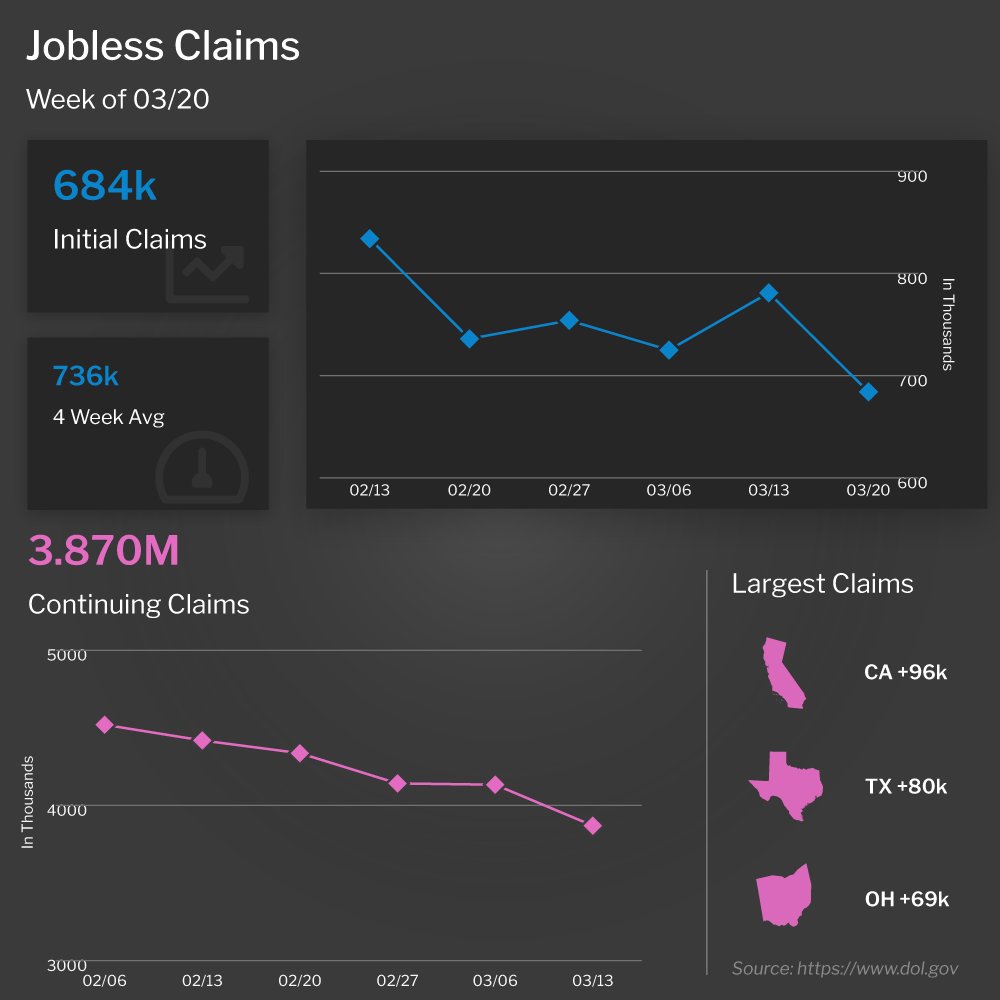 The final reading for fourth-quarter 2020 Gross Domestic Product came in at 1.9% versus the 2% that was expected. This decline reflects the effects of the stimulus from early last year wearing off. Year-over-year growth was reported at 4.3%, above the 4.1% estimated. However, the Atlanta Fed did cut its estimate for the first quarter 2021 annualized rate from 5.6% to 5.4%.

Lastly, Thursday’s 7-Year Note Auction was met with weak demand, which prompted a selloff in Bonds. However, the auction was not as bad as the one in February which had a much larger negative impact on Mortgage Bonds.

The Lowdown on Low Inventory of Existing Homes

Existing Home Sales, which measure closings on existing homes, fell 6.6% from January to February. However, sales were up 9.1% year over year. 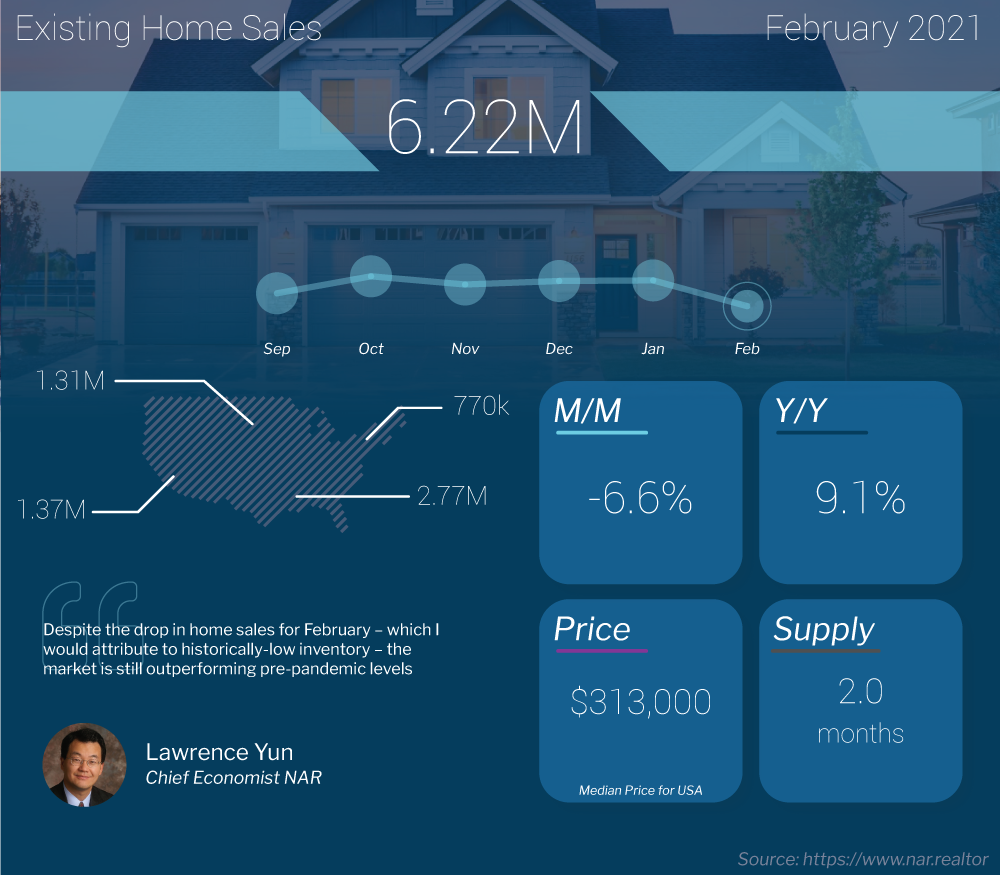 Low inventory remains a challenge across the country, as there were just 1.03 million homes for sale at the end of February. This equals a 2-month’ supply of homes, just above the record low of the 1.9-months supply that was available at the end of January. Inventory is almost 30% lower than it was in February of last year. With this stiff competition, properties sold in 20 days on average, which is another record low.

The median home price was $313,000, up almost 16% year over year. Note, this is not the same as appreciation. It simply means half the homes sold were above that price and half were below it. Sales on the low end were down 25%, while homes above $1 million were up 81%. This dragged the median home price higher.

Even with the stiff competition for lower-priced homes, first-time homebuyers accounted for 31% of sales in February while cash buyers increased from 20% to 22%. Investors purchased 17% of homes, up from 15%.

Lawrence Yun, the chief economist for the National Association of REALTORS, said, “I still expect this year’s sales to be ahead of last year’s, and with more COVID-19 vaccinations being distributed and available to larger shares of the population, the nation is on the cusp of returning to a sense of normalcy. Many Americans have been saving money and there’s a strong possibility that once the country fully reopens, those reserves will be unleashed on the economy.”

New Home Sales, which measure signed contracts on new homes, were down 18.2% in February, which was much softer than expectations looking for a 6% drop. However, sales are still up 8.2% on a year over year basis.

What caused the sharp decline from January to February? Freezing weather around the country certainly played a role, as did low inventory, as there was just a 4.8 months’ supply of homes available for sale at the end of February. Quite simply, if there were more homes available, we would have seen more sales.

The median home price was reported at $349,400, up 5.3% from last year. Again, this is not the same as appreciation. It simply means half the homes sold were above that price and half were below it.

Inflation rose 0.2% in February, which was lower than the 0.3% expected, per the Fed’s favored measure of inflation, Personal Consumption Expenditures (PCE). Year over year, the index increased from 1.4% to 1.6%.

Once you buy or rent a home, the next thing on your to-do list should…

November is a great time to recognize the contributions of Veterans. But did you know…

Walkability – How Walkable is Your Neighborhood?

Homeowners with an eye to sell their home may be hearing words like walkability. But…